In this section you will find the most exciting races online. Who does not like to play games? And how can you not like online games? Flash games are simple, fun and exciting special place among them is devoted to the races. Here you will find a wide variety of races, from simple races around the city to Formula 1 races. This is one of the most popular genres of games. Online Racing of course is some different level of games. As a rule, they are not as detailed and elaborated as console games, but nevertheless they are as same exciting. Races, either in the first-person or third-person perspective, always imply a contest for speed. So the place of the race can range from simple road or waterway, to absolutely unthinkable locations. Free racing games can be absolutely amazing, it’s been a long time since they were something primitive and simple, excellent 3D and 2D graphics is absolutely normal thing for a modern online race. Actually any race is limited only by the imagination of developers and here you can find the most unusual of them. 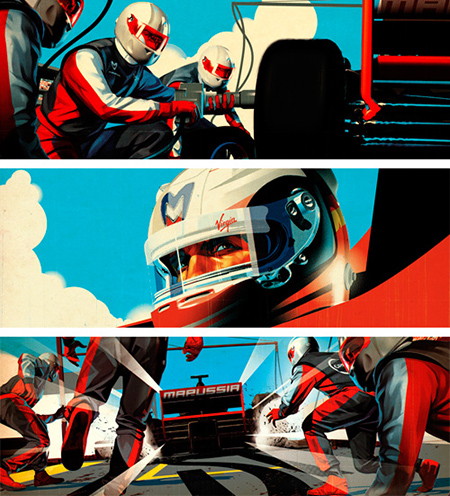 The birth of online racing

The history of the race, as a genre of games goes back as far back as 1973. Back then Atari presented the first race and it was space pursuit on spaceships (Space Race). It was black and white and was designed for two players who had to pass other spaceships and fly around the meteorites. The following year Taito company, released first car racing game called Speed Race, with improved graphics. Where roads and objects on the horizon were becoming wider or narrower as the player's car moved up the road, giving a realistic effect of driving. As you progressed through Speed Race, complexity and difficulty increased too. Controls included steering wheel and pedals, as well as speedometer and tachometer. In 1976 Sega released Moto-Cross, where for the first time it was possible to drive a motorcycle, and even on off road.

In 1982 Pole Position by Namco makes a great change in the world racing. But Pole Position II becomes a real revolution. The game appears in more realistic world and most importantly driving was very realistic, plus you had to qualify before the race. Player had to downshift the gear and hit the brakes in the corners. Transmission of vibration through the steering wheel to the player with the wheels spin was the innovation of Pole Position II. Due to its simplicity and variety of subjects Racing games immediately became popular.

In 1984 appears a huge variety of unusual races where you could ride horses, buggy and shoot from you vehicle and even fly into space. The second half of the 80’s gave birth to the first 16-bit game from Sega. Also developers begin to develop 3D games more intensively and start to improve opponents. City Connection was the first game with police pursuit. In general, in the beginning of the 90’s almost all real life races, were represented in the games.

It is worth mentioning that in the 90’s began a new era of racing with incredible graphics and gameplay. In 1993 Electronic Arts released the first game, of the most famous series of races in the world, called Need For Speed. In 1997 the world saw Grand Turismo, which is considered the number two in the racing world. Here we already can enjoy career mode, settings of the car, and much more. Impressive complexity and difficulty along with its similarity to reality made this game a legend. Another big hit was Collin McRae Rally, which was released in 1998, so all rally fans were able to enjoy a special kind of racing.

Racing Games online have a rich history, the roots of which go back to the slot machines and consoles. At the beginning of the two 00’s, old console games slowly began to migrate to the computers, as online games. Thus, there is 7-10 years lag tendency. The good old hits of computer racing are given new life on the Internet, sometimes in slightly modified and simplified form.

One of the main advantages of any driving simulator is the simplicity of controls. There are no intricate controls with thousands of combinations of buttons, as a rule it all comes down to the correct speed and proper turning. Of course not everything is so simple, and it wouldn’t be quite interesting. Online game developers manage to complicate games and to make them more interesting.

Play racing games on anything you can imagine. How about racing cars and motorcycles, spaceships and skis, boats and aircrafts, there is no limit to the variety of races. On our site we collect the best possible racings, so you do not need to spend long and exhausting hours search for what you want. You can cross continents, win grand prix, finish first in rallies, destroy enemies on the road, squish evil zombies, roam the oceans, travel in space and fly in the sky it is all possible with here on our web site.

Gaming industry developers have taken care of children, racing for boys - it's not only fun, but also can help you to take care of business while your child enjoys the game.

Love racing? How about Buggy? - You are at the right place. Would you like to drift and go crazy in a skid? The place is right again. Racing with good graphics, top speed on the highway or in the city, off road or on the water anything is possible with us. It will be interesting for children of all ages as well as adults.

Race on land, sea and air! Here you will find all kinds of racing simulation. Simplicity of controls is the main component for the popularity of games in this genre. Online games do not require any additional software installed on your computer and you can play for free.

All free car games online are available on our website at any time convenient to you. Spend your time with fun, feel yourself as a real racer.