Use arrow keys to play this game. Press Space for boost. 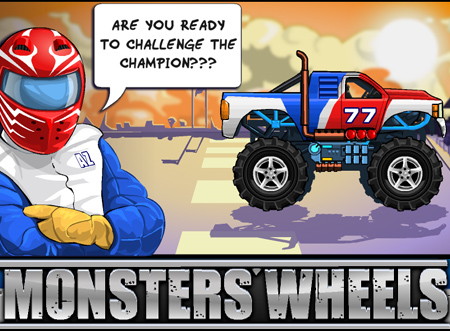 Monster wheels game is a fun race where you drive Bigfoot truck. The game has bunch of levels. For each completed level you will receive money prize and star of experience. The better you will drive, the more money and points you will get. When the car after the jump is in the air, try to keep a balance with the help of arrows. This will allow you to land well and not tip over. If you turned over and you can not go back on track, then press Shift.

Monster Wheels games built on three pillars: collect cash prizes, do tricks for money and good position at the finish. Well there is another thing - enjoy the game.

Conventionally, this game can be divided into four championships. Each "season" consists of three races and one additional race called Arena. In the arena you have to fight with one opponent in the rotation and speed or you need to set an altitude record, pulling of the rope to the flag or speed race using nitro. So your task is to finish first come and perform the required amount of tricks or collect a lot of points in an incredible rotation. In the third stage you will need a powerful car and in the fourth the maximum speed and nitro. After each championship you will be given a new car, but your opponents will not lag behind.

After each race you will get points, which you can usefully spend on your car. You will be able to increase the nitro tank for faster acceleration. Increase the size of the wheels, which will give your truck additional stability. There are some other improvements available in Monster wheels, like to increase the maximum speed of your monster on wheels.

Play Monster wheels do all kinds of stunts but still try to keep a balance in order not to break your car. Supposingly that it is quite difficult, but still possible. Nitro will help you a lot, press spacebar to use it. Also use nitro to get over the obstacles and use it as acceleration for overtaking and flying. You will see once you win couple of races and get used to the controls you will understand that this game is not as hard as it might seems from the first sight. Practice and you will succeed. Have a nice race!