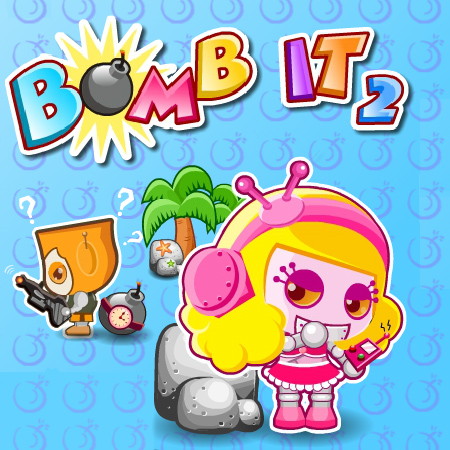 You will play as a small droid, who is planting bombs that will explode after certain time. The game has a variety of bonuses. Destroy all the enemies and stay alive is your primary goal.

Bomb it 2 - game for quick thinking

This is a very entertaining game, you can play against the computer or against your friends. Yes, exactly what if you are bored with your friend and you have only one computer and you want to play something, Bomb It 2 will solve this problem. Check who is the quickest you or your friend.

Play to have endless fun

Play bomb It 2 in four modes. Arcade is a battle for survival, where the strongest player wins. Weapons is where you have to kill 10 enemies. Collect the coins is mode where you need to collect 10 gold coins. And the last mode is color the tiles where you need to repaint 50 tiles in your color. Whenever you take a step the tile changes the colour, if your enemy steps on the same tile it will change the colour again. So the idea is to be the fastest to cover 50 tiles and to kill enemies on your way.

Bomb It 2 game also has a variety of thematic areas. The theme of the location does not influence the game but brings diversity. So you can choose: the beach, winter, disco, factory, crystal mine, theme park or the computer will make the choice for you. In Bomb it 2 you can choose the number of levels from five to twenty, the number of enemies from one to three and the number of players one or two.

Main goal of Bomb It games is to defeat the enemies or rather to say to bomb them. But sometimes you will need to win by points. So depending on the mode you will have to paint the floor in the color of your character, collect coins and sometimes to be the best killer. And do not forget to use teleports.

Bomb It 2 develops logical thinking and good reaction and at the same available for two players which makes it twice as nice. No matter what but it is impossible not to enjoy this game.