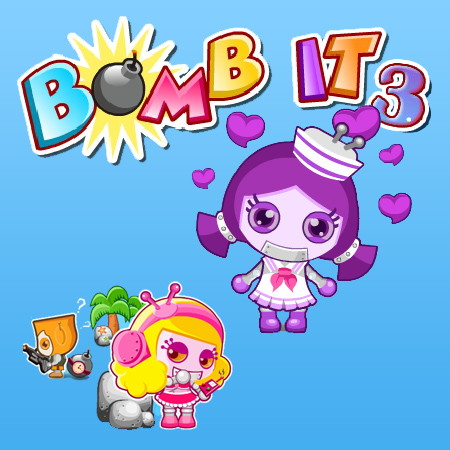 In Bomb it 3 game you can play in four different modes: Arcade is a massive survival battle, the smartest and the fastest wins. In Battle Royale you will have to kill 10 enemies. In the Watermania you will have to push 10 enemies off the map or 10 sheep using a water blaster. The final mode is called Race where you have to run three laps and be first at finish. The game also has a variety of locations that bring some diversity to the game. So you can choose the city at night, aqua park, shopping mall, farm or the computer will make the choice for you.

The game has a selection of of levels, you can choose from five to fifteen. You can set the number of enemies: from one to three. It is possible to play Bomb It 3 alone or with a friend. Also, when you feel comfortable, you can increase the difficulty level. In the game you can find the following items that you can use: bombs, power ups, acceleration, spare life, shield, glove sapper invulnerability. The following weapons will be available: water cannon, rocket flamethrower, laser, hammer bowling ball, garnet. Among transport you will have: cars, bikes, horses and air cars.

The most interesting game ever

The essence of the game is survival usually you need to blow your enemy but in sometimes you need to win on points. Different mode has different rules in some you have to be the best killer in the others you need to be the fastest and the strongest. But all of them are equally exciting and fun.

Bomb it 3 is a unique game if you want to play with a friend in an interesting online game do not hesitate and go right ahead.