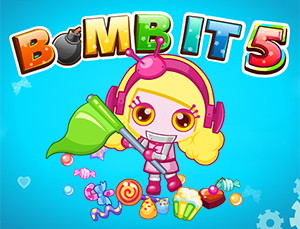 What's new in Bomb It 5 game

This part has 4 game modes. Each has its different objectives and tasks. First you need to select the main character. You have a choice of 8 robots. You can choose the appearance you like and buy new clothes. You can play bomb it 5 as two player game or in single player mode. You can also select the number of enemies and levels. There are several variations of the arena, such as birthday party, candy factory, zoo, luxury shop, magic library and a movie theatre. Following transport will be available to you: frog, car, skate, and even mammoth.

In arcade mode of Bomb It 5 game main task is to destroy all enemy robots. Opponents do not miss the chance to destroy the main character, so do not stand still. Initially, in your arsenal is a wooden hammer and bombs. By collecting bonus icons character will receive improvements. So you can constantly improve during the level.

There are 2 outcomes to complete a level. At the beginning of the level starts the timer, so you have to either survive to the end of the time or kill all the enemies. You will have 3 minutes to destroy all opponents. But if you do not have time to complete the task, then you can win by points.

Next game mode is called Battle Royale, where you need to destroy 10 enemies. The fight is conducted in an open area. Each player is armed with only a wooden hammer. Show what you can and win in Bomb 5.

Time to have fun

The essence of pac man mode is to get ahead of rivals and collect as many coins as you can. You will also be able to pick up bonus improvements icons. When the last coin is collected starts the scoring. Collected coins can be spent on purchases.

In the last mode of Bomb It 5 the main task is to capture the green zones. They occasionally appear on the level. You also need to get there as quickly as possible. Points will be awarded for the number of captured areas, as well as the destruction of the enemies. You will need to compete with three robots. Play Bomb it 5 online right now!