Use mouse to play this game.

Keeper of the Grove 3 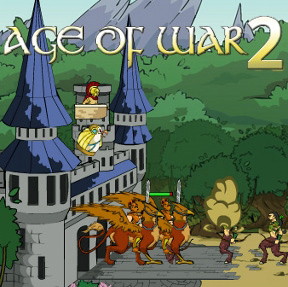 If you are a big fan of strategy games, but you do not have time for a long and involving game where you need to take well-balanced strategic decisions that might take a while to see the results of. Are you tired of the daily routine and you have been thinking about playing an exciting game? Then you will most definitely will fall in love with Age of war 2 game. It is exactly what you’ve been looking for.

What is Age of war 2 unblocked about?

Age of war 2 is a fast online strategy with elements of the RPG. Your task is to destroy the enemy's base, while protecting your own base with all the forces you have got. As you and your opponent are endowed with divine powers and a certain amount of resources that need to be disposed very quickly and correctly. So in the beginning, your forces are equal. For killing enemy soldiers you will get gold, for which you can hire new soldiers and also improve the old ones this is where the strategical part kicks in. As now you need to consider growing the army of improving the existing one.

Each type of soldier is endowed with his special abilities, which can be useful in a certain strategy that you may adopt. It is important not to forget to improve your base and your warriors, to use super abilities and to fight back enemy attacks. You start the game from the Stone Age and evolve to modern technologies. As your units improve, you become more powerful and move on to the next era. The sooner you change the era, the better policies you will implement and the quicker you will improve your warriors, the sooner you can change the course of the war into your own favour. The main idea of the game is something like checkers or even high-speed chess. Sometimes you have to sacrifice a pawn for the base. Also you have three levels of difficulty to choose from in Age of war 2 online: easy, medium and complex.

So you can progress as you Play age of war 2. On average, one game takes at least half an hour, depending on what tactics you conduct. If you prefer to attack or are more prone to improvements and longer game, the gaming time will be different. This game should make a lot of fans in its genre. As always, this game like other games, is available for free on our website. Don’t be afraid to try different kinds of tactics of should I say strategies, experiment. Try to discover all the eras, study all the warriors and what do they do, in general make sure to have a lot of fun.