Use mouse and arrow keys to play this game. Press Space to stop Bob 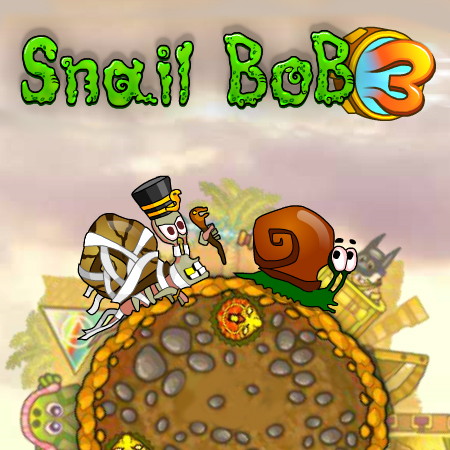 Who does not like stories about the adventures associated with ancient Egypt, with its mystical secrets and unique atmosphere? I think each of us once in life imagined himself traveling Egyptian desert next to the pyramids, discovering unknown secrets of antiquity. It sounds pretty tempting. Of course not everyone gets lucky, but do not despair because there is a great alternative. You do not have to buy a ticket to Egypt and drag through the desert under the scorching sun. It is enough to just simply play Snail Bob 3.

This is why this part of the game is also called Snail Bob 3 Egypt journey. Everything will be just like you expect in pretty unusual way. After grandfather’s birthday, grandpa decided to pay back his grandson with special something. So he took Bob to the museum. They entered the hall of Egyptian antiquities. There were many fascinating exhibits, but the snail immediately interested in unusual mechanism. It was the golden circle with decorations. Snail wanted to touch it, but his grandfather angrily jerked him and warned that such antiquity should not be touched.

Bob could not resist and touched the unusual device when grandfather was not watching. Suddenly the mysterious mechanism started to spin! It began to emit electrical discharges and then started to suck everything around it. Grandpa Was astonished by what he saw. Everything was spinning in the room and eventually Bob was sucked into the mechanism and grandfather was left alone in the museum.

Our adventurer found himself among very old buildings and everything was pointing out to the fact that he was in ancient Egypt. When pharaohs used to rule the world. He had no choice but to make every effort to return home.

Snail Bob 3 game begins with huge problems for our hero. All the buildings are very insidious and are full of traps. Though Bob is tougher than he seems he needs your help. This game requires logical thinking, consistency and attention.

Help your character to pass the level from the beginning to the end. Use all kinds of mechanisms that will help to continue to play. At the same time collect three bonus stars to score more points. It is quite hard to find those stars. These stars are very well hidden on each level. In many cases they can be found in the leaves of palm trees, with the statues in the background, sometimes as a fossil in the ground or whole mechanism can be involved into getting to the star. Sometimes you need to assemble it piece by piece, or move the birds that are hiding it.

In this game all levels are filled with various obstacles. You should take immediate decisions and act quickly. Use the acceleration of your character for fast movement. To stop the snail simply click on it with the mouse. With each new level, you will open a new funny picture of Snail Bob, which can be found in the gallery.

If you have any problems on any of the levels or simply want to see what the game is about watch Snail Bob 3 walkthrough.