Use mouse to play this game. 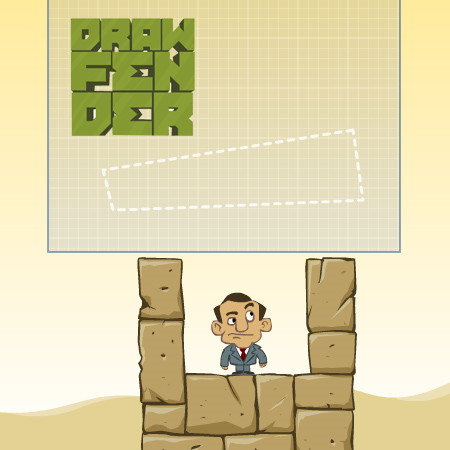 Drawfender is an interesting logical game

A well-known philanthropist is going to a beneficent tour around the world to help people in need. Naturally, such an event was mentioned in an article in the local newspaper. After reading the newspaper the leader of the bandits was very indignant, because it would hurt his dishonest business. To prevent this, the boss summoned two of the best mercenaries. On his orders they interfere with our hero or kill him. You will need to save him on every level. Bandits will shoot from the cannon and you must draw a protective structure for rescue.

Before you start, you need to get acquainted with the controls. Fortunately, Drawfender game is rather easy in this regard. You only need a mouse. On the drawing field put a dot. Then draw a line. And so on until you will create a figure. It is important to know that it can both protect and kill the character. After all, the force of the cannon shot is so great that the created "construction" can move without problems.

Drawfender game is fun for the whole family

So consider the Drawing Defense game in more details. You will find 30 interesting and challenging levels. Each of them has a field marked with squares for creating protective figures. This is how the game is played. It depends entirely on your imagination and spatial thinking. You will even have to apply knowledge in such disciplines as physics and geometry. The main character in each level will stand still. A cannon will be aimed at him and sometimes there will be several cannons. Note that they can be of two types. Some shoot immediately, after you create the figure, while others are more problematic, since they have a timer. Eventually you will have to defend our hero from powerful lasers. They affect your structure directly. Therefore, think carefully about creating your figure. Every little thing plays a huge role. Try to use every detail that is on the level. This will give an additional chance of success. But there are good news. The process of drawing does not have time limits. So, you can think about every step without rushing yourself. Remember that the protection, after it was hit by the core can move around. And often, this is completely undesirable. Sometimes on the field there may be a small dot. Draw the protective figure so that one of its corners touched this dot and you will see your figure in action.

This game is an excellent option for children who go to primary school. After all, they can develop logical thinking, as well as it can serve as a vivid example of familiarity with physics and geometry. Adults also will not refuse to test their skills and the knowledge they received in school. Everyone will appreciate this game.

Save the character, help him to deal with the bandits so he can go to help people. Good luck!