To use radal press E, to drill use mouse. 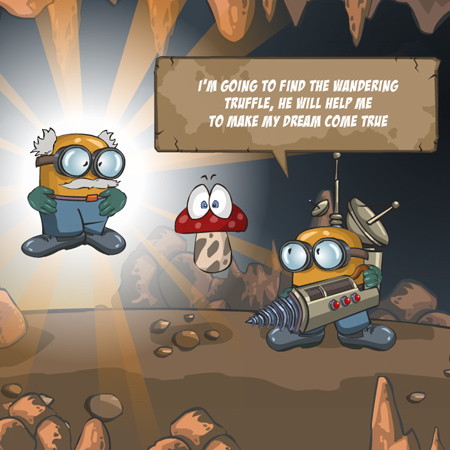 You can play Diggy whether you are an adult or a child. It is very simple, but extremely exciting and involving you can spend at least an hour or more into playing. All you need to do is to guide your little Diggy. This kid is going to find the treasure, but his main goal is magic mushroom, and it is worth the most money.

Your character Minion Diggy has the equipment, which consists of three pieces: a drill, a battery and a radar. Each of these devices can be improved. Boer may be transformed into a powerful drill, and by the end of the game you can change it into neutron emitter, that's when it will become possible to dig very deep. The battery can also be upgraded. You can install recharge from the sun. At the end you will get a nuclear reactor battery with an incredibly long charge and charging from the heat (at the end of the game you need this feature). Simple Radar can be developed up to the sonar, which is able to determine the price of items. But at the end of the game this radar will help you find the coveted magic mushroom and catch it.

What is Diggy game about

In addition, in this Despicable Me game there is a system of treasures improvements. In total, there are 14 precious minerals and jewels hidden in the ground, each such treasure has its price. But you can improve the assessment of the treasure and then, each discovery will significantly add to the price, so do not skimp on something that will bring you many times more money. Diggy game has an unusually extensive system of achievements and discoveries of all kinds. Like any archaeologist, sometimes you can find quite unexpected things. Among the stones and earth you may come across art or just unusual items. Some of those items worth good money. Collect the entire collection of outstanding items, rare archaeological sites and all the icons.

It is important to distinguish between the hardness and density of the soil. The darker the ground the more difficult it to bore and therefore it will take more energy. The stones are the hardest, they take the most energy, but at times they are fraught with something precious. The deeper you dig, the harder the soil, but also much more expensive fossil. But the most valuable visible things only with the help of radar. Similarly, the coveted mushroom hiding at the bottom. The essence of game Diggy is quite simple but there is one more thing, after you catch a mushroom, try to dig a little deeper and unravel the mystery of the earth…